The Difference a Decade Makes: First Employees at LI Tech Company Reflect on 10 Years in Mobile 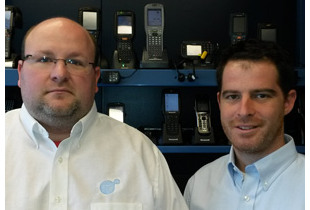 Calverton, NY: When Joseph Kraebel became Portable Technology Solutions' (PTS) first hire in June 2004, he found himself in a situation familiar to anyone who's experienced the “romance” of working on a tech startup: “It was the middle of summer and we had about 150 Palm OS barcode terminals,” he says, referring to what was then the industry standard “We were in an upstairs office with no AC, and we had to put batteries in each unit, load it with our software, test it, and repackage it.” Ten years later, what does he remember most about the experience? “It was hot,” he says, laughing.

In December 2004, Howard Heckman joined Kraebel as the Long Island-based mobile software manufacturer's second employee. This year, the two marked their ten-year anniversaries at PTS, which now counts the likes of Citibank, Columbia-Presbyterian Hospital, and Dell among its more than 10,000 customers. Kraebel presently holds the title of Mobile Solutions Architect, while Heckman works as Lead Developer. Between them, they've developed thousands of mobile solutions that help customers keep track of everything from courtroom files to newborn babies. With 20 years of shared experience going back to mobile's infancy, they've seen a lot of changes in the technology and how it's applied.

“My first foray into product testing,” recalls Kraebel, “was with our TracerPlus 2.0 mobile barcode software, which was designed for the Palm platform.” This was when the Palm Pilot, now all but forgotten, was cutting-edge mobile technology.

Heckman's first assignment, upgrading the same software for the then-new Windows Mobile platform, speaks to the transformations that were starting to shape the industry. Since then, he's written additional revisions for Android and iOS. Each new platform, he notes, has brought innovations that have enabled a slew of additional applications.

“We've come a long way from pre-smartphone days, when users were limited to local data collection that they'd only be able to dump into a spreadsheet or simple text file,” says Heckman. “Cameras opened up possibilities for a lot of new inspection apps. And mobile RFID suddenly meant you could read entire inventories in the time it used to take to scan a single item.”

“In the beginning, we had to worry about the device a lot more than we do today,” says Kraebel, summing up – with some understatement – the vast distance traveled in a decade. “We were working with eight megabytes, which could only store 3000 records, max. As far as the software was concerned, you had to really watch the resources you used so that the device didn't crash.” Improved bandwidth, too, has removed significant practical constraints on what software developers could do with the technology at hand. Early on, he says, “we had to nitpick every bit of data TracerPlus sent over the network. The costs of sending images could add up very quickly, so everything had to be compressed.”

Asked about some of the biggest challenges they've faced over their years designing software, Kraebel and Heckman can both cite episodes of the kind of “spec creep” that any engineer knows well. But they are quick to add that there's a tangible upside to customers pushing the boundaries of what their software can do. As Kraebel points out, “Most of our newer features are customer driven. We like to think of ourselves as pretty smart but we don't always think of everything.”

“More often than not,” adds Heckman, who's currently at work on TracerPlus 9.0, “customizations find their way into the next release – in a form that has the flexibility to be useful to the greatest number of potential users.”

Looking ahead, PTS's first two employees see the mobile landscape continuing to diversify in terms of the platforms available. Looking back over their years in the industry, Kraebel says he has found the greatest satisfaction in “successful communication with customers and partners – working together to agree on a spec and making it happen. And when they come back and say, 'Wow, this process that used to take me weeks and now I can do it, more accurately, in a day' – that's great.” Similarly, Heckman adds, “People use our software to keep track of what's most important to them–for a government contractor, that could mean computers that are helping our military do its job; for a hospital, it might mean premature babies and how they're being cared for. To see something you've made being put to work like that, “ he says, ”is pretty cool.”